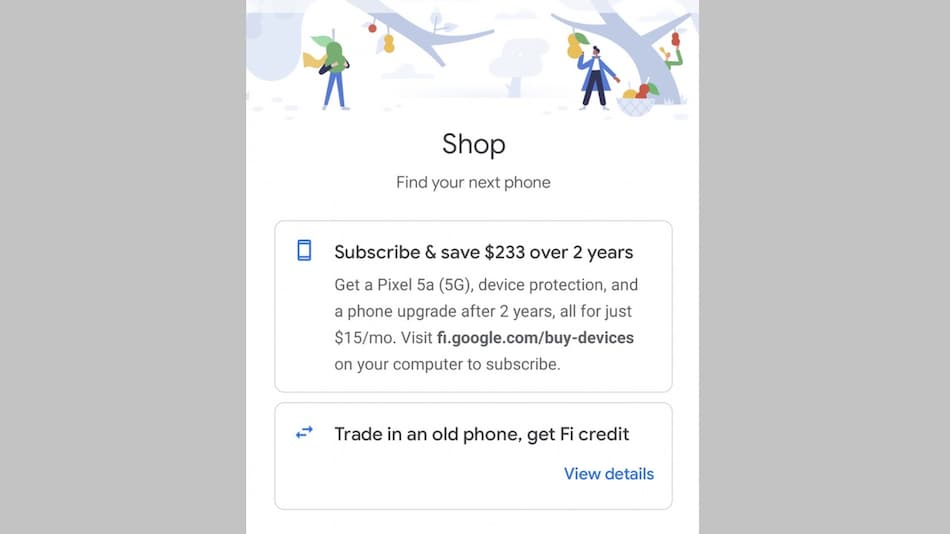 Google Pixel 5a 5G pricing may have been accidentally leaked by Google in its Google Fi app. Google unveiled the Pixel 5 in September last year as the sole flagship offering for 2020 but it came with the more budget-friendly Pixel 4a 5G, both of which are powered by the Qualcomm Snapdragon 765G SoC. The Pixel 5a 5G has been expected for quite some time now and there have been several leaks around it as well. Now, the phone’s pricing seems to have been suggested and it is comparable to the Pixel 4a 5G’s price.

Google Fi is a mobile virtual network operator (MVNO) that offers connectivity through cellular networks and Wi-Fi. It comes with an app that, as noted by multiple Reddit users (1,2), mentioned that the Pixel 5a 5G was listed in the shop section. The phone’s name was part of a promotional banner that stated that the Pixel 5a 5G can be purchased for $15 (roughly Rs. 1,100) per month. This price includes the cost of the phone, device protection, and a phone upgrade after two years.

The aforementioned banner has now been removed and the link that was present along with it now redirects to the Google Fi Pick your plan page.

Most recently, component images for the Pixel 5a 5G surfaced online showing a rubberised finish, 3.5mm audio jack, and a 4,680mAh battery. The phone is largely expected to be unveiled on August 26 but Google has not shared any information on phone, other than its availability in the US and Japan.